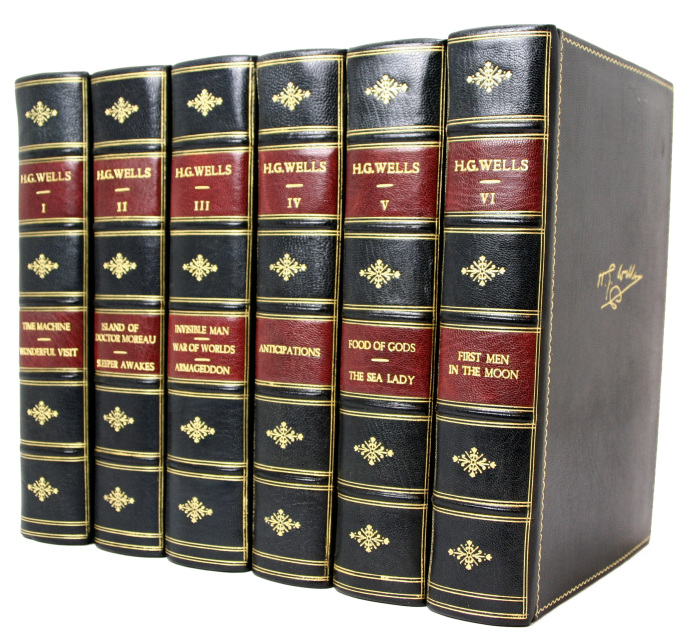 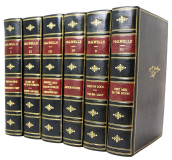 The Complete works in twenty-eight volumes.

The Atlantic Edition. A Limited Edition of 620 sets for Great Britain and Ireland, of which 600 are for sale and 20 are for presentation. This is number 412. Includes photogravure frontispieces and titles in crimson and black.

Signed by the Author on the limitation page.

A Limited edition of one thousand and fifty sets was also published by Charles Scribner's Sons for America.

Wells (1866-1946) in his lifetime was regarded as the chief literary spokesman of the liberal optimism that preceded World War I. No other writer has caught so vividly the energy of this period, its adventurousness, its feeling of release from the conventions of Victorian thought and propriety. His influence was enormous, both on his own generation and on that which immediately followed it. None of his contemporaries did more to encourage revolt against Christian tenets and accepted codes of behaviour, especially as regards sex, in which, both in his books and in his personal life, he was a persistent advocate of an almost complete freedom. Though in many ways hasty, ill-tempered, and contradictory, Wells was undeviating and fearless in his efforts for social equality, world peace, and what he considered to be the future good of humanity.

As a creative writer his reputation rests on the early science fiction books and on the comic novels. In his science fiction, he took the ideas and fears that haunted the mind of his age and gave them symbolic expression as brilliantly conceived fantasy made credible by the quiet realism of its setting. In the comic novels, though his psychology lacks subtlety and the construction of his plots is often awkward, he shows a fund of humour and a deep sympathy for ordinary people. Wells' prose style is always careless and lacks grace, yet he has his own gift of phrase and a true ear for vernacular speech, especially that of the lower middle class of London and south-eastern England. His best work has a vigour, vitality, and exuberance unsurpassed, in its way, by that of any other British writer of the early twentieth century.