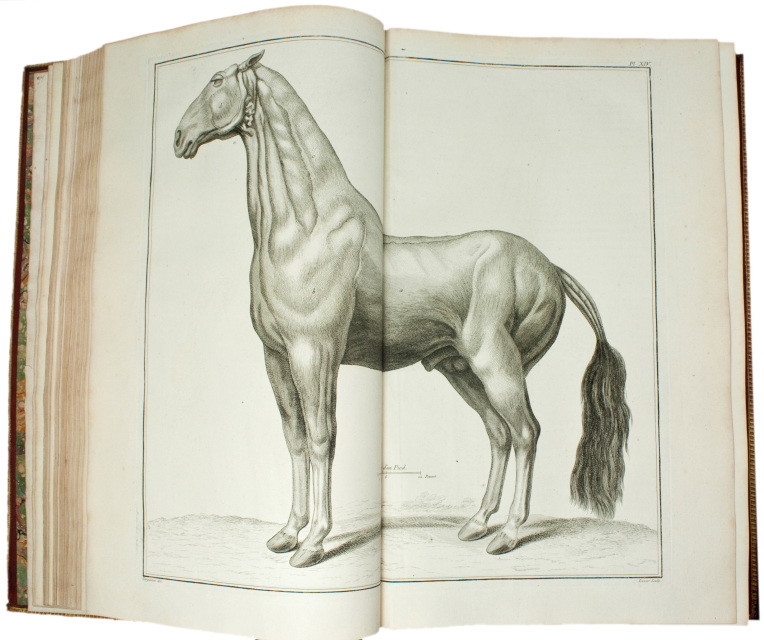 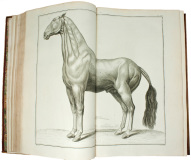 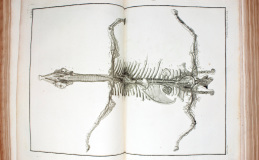 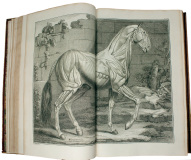 First Edition. Half title-page; engraved frontispiece; vignette title-page; portrait plate by J. B. Michel after Harguinier; one engraved coat of arms for Charles-Eugene de Lorraine on dedication page and seven numbered engravings as text headers; and fifty-six plates of which nineteen are double-page or folding. The plates are engraved by Ch. Beurlier, B. M. Adam, F. A. Aveline, C. Baquoy, Benard, L. Bosse, Prevost, Mesnil, Germain and others after Harguinier, Lafosse and Saulir. At the rear is a six page Table of Contents, a sixteen page Explanation of the Plates and one page of Errata.

A very scarce work in excellent condition with only minor wear.

This is a fantastic copy of what is recognised as the most magnificent work ever produced in the history of veterinary literature. Only one edition in Folio was published and it is often bound into two separate volumes due to the size and weight of the entire work. For this reason it is unusual to find a single volume in its contemporary binding.

There are sixty-five plates listed at the rear which include the portrait and the engraved headpieces in the text.

There are only four records detailed on the ABPC of this work and none of them appear comparable in standard to this copy which is in exceptionally good condition. In addition this superb work is not often found either complete or in good condition. Mennessier de la Lance states, volume II, 20: 'un véritable monument élevé à l'Hippologie', - which cost Lafosse more than seventy thousand livres to publish'!

Lafosse came from a family of dedicated veterinary doctors. A surge in the improvement within veterinary medicine and surgery, especially as regards the horse, took place between the seventeenth and nineteenth centuries and the Lafosse family (1670-1820) were instrumental in this progress.

Etienne Lafosse (1670-1754), Philippe great grandfather, was descended from a Paris farrier family. He was a member of the guild of farriers, known since the thirteenth century with first statutes of 1463. At the age of twenty-seven he was appointed as 'maréchal' at the small stables of the king in Versailles. In 1724 he passed this function to his son whose house he died in at the age of eighty-four.

Philippe's grandfather Etienne-Guillaume Lafosse (1699 -1765) who had inherited the commission at Versailles aged twenty-five remained in office until 1759. He resigned on condition that his son Philippe-Etienne be appointed. Etienne-Guillaume made his fortune and his professional experience enabled him to write, between 1750 and 1758, a number of texts on horse diseases.

Philippe (1738-1820) is the most famous of the Lafosse family. After his studies in human anatomy at the hospital Hotel Dieu in Paris he devoted himself to the study of disease within horses. At the age of nineteen he was sent to the army to detect diseased horses in the cavalry regiments. He was employed in this manner until the end of the Seven Years War in 1763. During these years he also succeeded his father in 1759 and started a private veterinary school. In the latter he was very much hindered by Bourgelat, Bertin and the head of the police force in Paris, Antoine de Sartine.

Lafosse produced several works on the subject of horses however he is best known for his 'Cours D'Hippiatrique' which he worked on from 1769, this work being the first edition. From 1777-1788 he served as a veterinarian in the gendarmerie corps. He had a fairly chequered time during the Revolution, one moment holding a position of importance and the next being imprisoned for ten months.

Following this period he was chosen as an associate member of the Institut de France. He left Paris and practised human and veterinary medicine in the village of Montataire until his death in 1820 at the age of eight-two.