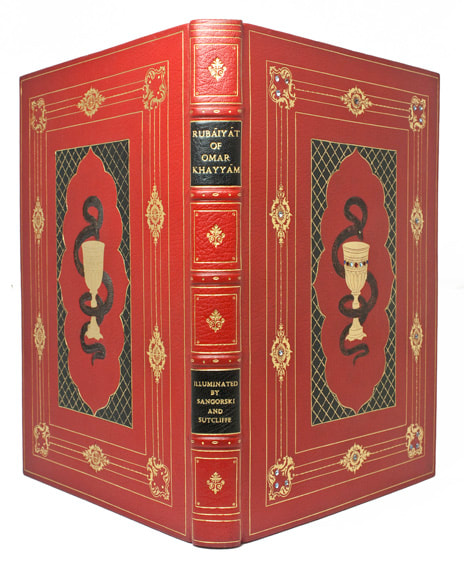 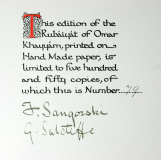 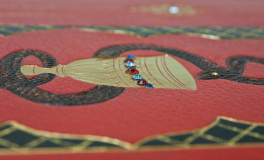 Translated into English verse. With an introduction by A. C. Benson. Reproduced from a manuscript written and illuminated by F. Sangorski & G. Sutcliffe.

A Limited Edition ‘printed on Hand Made paper, to five hundred and fifty copies, of which this is Number 79’. Signed in ink by both J. Sangorski and G. Sutcliffe. Twelve illuminations in gilt and colour. Engraved and printed by André and Sleigh with flourished initials in red and blue.

A fine example of Bayntun-Rivière’s work, probably executed in the 1950s with stunning illuminations.

﻿Sangorski famously presided over the creation of a supremely elaborate peacock binding for the 'Rubaiyat', on commission from Sotheran's, which was sold, and then lost in 1912 when it went down with the 'Titanic'. Sangorski himself was to die only six weeks later in a bathing accident. George Bayntun of Bath acquired the firm of Rivière and Son in 1939.

The "Rubaiyat" was 'done in mathematics by early Arabic scholars and by al-Biruni was continued by Omar Khayyam (died 1122), to whom the Seljuq empire in fact owes the reform of its calendar. But Omar has become famous in the West through the free adaptations by Edward FitzGerald of his roba‘iyat. These quatrains have been translated into almost every known language and are largely responsible for colouring European ideas about Persian poetry. The authenticity of these verses has often been questioned. The quatrain is an easy form to use—many have been scribbled on Persian pottery of the 13th century—and the same verse has been attributed to many different authors. The latest research into the question of the roba‘iyat has established that a certain number of the quatrains can, indeed, be traced back to the great scientist who condensed in them his feelings and thoughts, his skepticism and love, in such an enthralling way that they appeal to every reader. The imagery he uses, however, is entirely inherited; none of it is original.'

Edward Fitzgerald (1809-1883) is best know for his translation of this work which, though it is a free adaptation and selection from the twelfth-century Persian poet's verses, stands on its own as a classic of English literature. In translating Omar Khayyam, Fitzgerald’s method was to transmit the essence of the poet's mood and thought, often in his own imagery, in a sequence that would be intelligible to English readers.

In March 1859 the Rubáiyát was published in an unpretentious, anonymous little pamphlet. The poem attracted no attention until, in 1860, it was discovered by Dante Gabriel Rossetti, and soon after by Algernon Swinburne. Its appearance in the same year as Darwin's Origin of Species, when the sea of faith was at its ebb, lent a timely significance to its philosophy, which combines expressions of outright hedonism (“Ah take the Cash, and let the Credit go”) with uneasy ponderings on the mystery of life and death.'