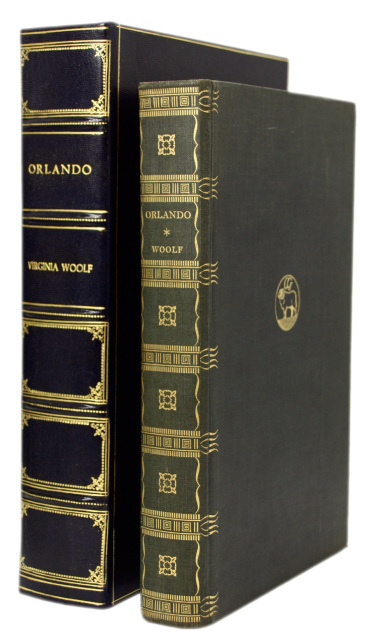 First American Edition. A Limited Edition of '861 copies have been printed on pure rag paper of which 800 numbered copies, signed by the Author, will be for sale. Distributed in America by Random House.' This copy is No. 'Out of Series'.

SIGNED by the Author in her distinctive purple ink to verso of half-title.

Frontispiece and seven photographic illustrations including Virginia Woolf as Orlando. The fine typography is by Frederic Warde and the printing by William Edwin Rudge.

An excellent copy of a very rare edition.

An out-of-series copy of a limited edition of 861. Kirkpatrick

The First American Edition was published some nine days before the UK trade edition. This copy fully agrees with the description in Kirkpatrick's bibliography e.g. 'publisher's device of a ram on a green bank' etc.

Considered one of Woolf's best works Orlando follows the long (over four hundred years) and unusual life of the title character. Woolf examines the meanings of masculinity and femininity as these definitions changed in Europe over the course of four hundred years. In tracing those changes, Woolf presents a feminist overview of history from the days of Elizabeth the First to the end of World War I. Orlando, who was modeled on Woolf's close friend Vita Sackville-West, goes from being a young man in Queen Elizabeth's court to a love affair with a Muscovite princess; from Ambassador Extraordinary to encounters, now as Lady Orlando, with the famous English writers Pope, Addison, and Swift; finally, Orlando experiences childbirth.

This excellent feminist novel emphasizes Woolf's belief that women are the intellectual equals of men (and can be considered a companion piece to her A Room of Ones Own).

Woolf, (Adeline) Virginia née Stephen (1882 - 1941) British author who made an original contribution to the form of the novel and was one of the most distinguished critics of her time.

She was educated at home by her father, Sir Leslie Stephen, and, after his death in 1904, lived in Gordon Square, London, which became the centre of the Bloomsbury group (q.v.). In 1912 she married Leonard Woolf, and in 1917 they founded the Hogarth Press, which published her books.

After her novels The Voyage Out (1915) and Night and Day (1919) appeared, she began to experiment. She wanted to stress the continuous flow of experience, the indefinability of character and external circumstances as they impinge on consciousness. She was also interested in the way time is experienced both as a sequence of disparate moments and as the flow of years and of centuries. From Jacob's Room (1922) onward, she tried to convey the impression of time present and of time passing in individual experience and also of the characters' awareness of historic time.

In Mrs. Dalloway (1925) and To the Lighthouse (1927), she extended her technical mastery; above all, she gave to each of these novels a tightly organized form, partly by using poetic devices such as recurrent images and partly by restricting the time of the action. Orlando (1928) is a historical fantasy with evocations of England, and especially literary England, from Elizabeth I to 1928. In her long essay, A Room of One's Own (1929), she described the difficulties encountered by women writers in a man's world.

Returning to the novel, in The Waves (1931) she confined herself to recording the stream of consciousness. The reader lives within the minds of one or the other of six characters from their childhood to their old age. Human experience of the 'seven ages of man', rather than character or event, is paramount. The Years (1937) is more expansive and traditional. In Between the Acts (1941), the action, as in Mrs. Dalloway, occurs on a single day, but extended time is suggested by the staging of a village pageant recording English history, while the reader is also kept aware of impending war. In a recurrence of mental illness, after finishing Between the Acts, she drowned herself near her Sussex home.

Woolf wrote two biographies: one is fanciful, a fragment of the life of the Brownings through the imagined memories of Elizabeth Barrett Browning's dog (Flush; 1933); the other is a full-length biography of the art critic Roger Fry (1940). Her best critical studies are in The Common Reader (1925), The Common Reader: Second Series (1932), The Death of the Moth (1942), and Granite and Rainbow (1958).